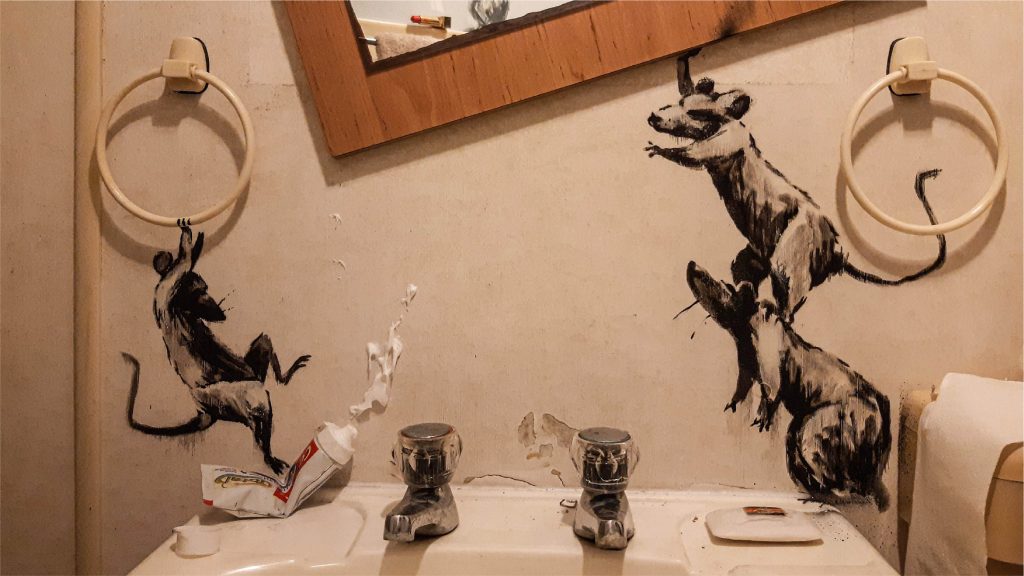 What we can learn from rats

Marketers should take a leaf out of Banksy’s stencil book.

We’re not condoning vandalism, but there are a few things we can learn from the elusive British artist. Behind the artwork, political statements and concealed identity, is a masterclass in modern marketing.

Don’t give everything away at once

People are suckers for a whodunnit, and Banksy’s managed to pull of one that spans over 30 years. He’s world famous and anonymous at the same time, every move meticulously planned to protect his identity. And Banksy leverages his obscurity to leave an audience wanting more. It keeps him relevant and a talking point as fans and critics attempt to dissect the pseudonym.

We like to be taken along for the ride.

The same could be applied across services and products. With the extra attention that mystery creates, comes greater focus and added weight. Without closure, it’s hard to think about anything else, so whether it’s a campaign or a new product launch, the longer you can keep them guessing, the better.

Have a clear identity

Weird to say about someone who doesn’t have a face, but identity is much more than that. Although Banksy’s work spans lots of different mediums, you could easily pick it out of a line up, even with his vast following of copycat artists.

That’s why having a clear brand voice and image is so important. Keeping it consistent is even more so. A strong brand makes you recognisable, creates faster product or service acceptance and adds value. But it can take time, and to stand out amongst saturated markets you’ll need to go against the grain – all that risk can be outweighed by the potential rewards.

Play hard to get

Banksy uses one of the oldest tricks in the book – supply versus demand. And you can’t get any less than a one-off, especially if it’s adorning a 30-foot wall. You’ll need two things for starters, a lofty bank balance and a forklift.

His artwork is so rare that someone even paid £2,300 at auction for the screen that covered one piece – you read that right, the plastic screen.

Although marketers cannot employ these tactics to the same extent, there is still room to apply the theory behind it. A limited offer or exclusive drop may be more up your street, and less likely to end with an ASBO.

For those who can’t get their hands on a Banksy (which is basically everyone) and for an artist who likes to keep himself to himself, there are plenty of ways to engage.

Starting off on the streets and staying there allows him to keep his audience wide and promotes a sense of engagement. Banksy knows where his audience is, they’re not in the fancy galleries, they’re on the streets, so he meets them there. Messages are simple, memorable and most importantly, hashtag-able.

Find out where your audience is. Then grab their attention with messaging and distinct visuals. Then top it off with a multipurposed CTA, one that gets them to buy and gets them talking – the latter is often more valuable.

Don’t underestimate the power of PR

For someone who hates advertising, he certainly does a lot of it. And he does it well.

But arguably one of his most successful high jinks cost practically nothing. By shredding a piece at auction he got the whole world talking – something marketeers could only dream of.

Was it real? How long had it been planned? Was the auction house in on it? The tactic of mystery came into play again.

But even smarter was the fact that he didn’t really destroy his artwork at auction, he created one – and a whole load of publicity to boot. Even other brands got on board. McDonalds, IKEA, Lidl and Perrier all jumped straight on the bandwagon, attempting to piggyback on some of that valuable publicity.

Banksy is very particular about his channels, and we’re not just talking walls and bridges. He sticks to Instagram, which makes sense, it’s visual and shareable. But it mostly serves as an authentication platform so fans can confirm which pieces are genuine.

He exploits digital channels and word of mouth, the two resources that are leading the way today – yet another considered marketing tactic. He doesn’t need a fancy gallery either, there is something more authentic about stumbling across a piece of art. And you feel less sold to.

When it comes to channels, right now, the options are overwhelming. Marketeers are spoilt for choice. The right channel mix makes all the difference. So, think like your desired customer, spend some time in their shoes. No matter how great your offering is, you’re not going to be successful if the right people don’t know you exist.

Although it looks effortless, Banksy’s success hasn’t happened by chance. There are strong marketing principles behind his global status.

As the graffiti equivalent of Marmite, he divides opinion. But there’s one thing that can be agreed, he’s a master of selling himself and any brand could learn a thing or two.

If you’ve got a brand you want use to sell, get in touch – we’ve got the talent and spray paint on standby.